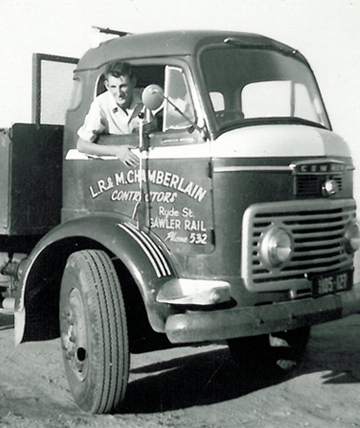 In the early years, LR&M Constructions operated a sand and metal business including general contracting, before branching into more serious civil construction projects with 6 employees, 4 trucks, 1 front end loader and a tractor.

The major clients in those early years were Local Government Councils, State Government Agencies and later Federal Government Departments as the company expanded.

By 1975 the company had 32 employees and 41 items of earthmoving plant. In December 1977 the company was awarded its largest contract from the Federal Government for Extensions to the Main Apron and Associated Works for the RAAF Base Edinburgh.

On the 30th of October 1979 LR&M Contractors and Engineers Pty Ltd changed its name to LR&M Constructions Pty Ltd, as the Directors were of the opinion the existing name was too long. The original depot was situated at 11 Ryde Street, Evanston at the rear of Lionel and Miriam?s private home before relocating to 3-5 Calton Road, Gawler where the company remained for the next 27 years.

In January 2008 the company moved to a brand new, custom built, modern premises at 6 Roseworthy Road, Roseworthy. The complex was officially opened on the 30th May 2008 by Robert Hornsey, Mayor of Light Regional Council. These premises were specifically designed to suit the company?s needs for now and in the future allowing for office expansion as well as having an extensive modern workshop all on a large land holding of 18,000m2 which is ample space for storage and growth.