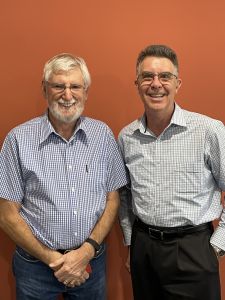 Experienced construction executive and governance expert Stephen Harmer has joined the Advisory Board of LR&M Constructions as its Chair. Stephen takes over from John Chamberlain, who has led LR&M Constructions since its inception in 1966 as Managing Director and then Board Chair.

Stephen is an experienced Chair, Treasurer, Non-Executive Director and Advisory Board member with a demonstrated industry, government and academic network and over 5 years governance skills in the For Purpose (Not-for-profit) and Private sectors. 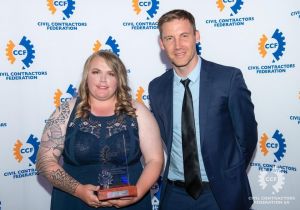 LR&M Constructions team member Montana Marshall has won the Trainee of the Year - Certificate II Civil Construction at the prestigious Civil Contractors Federation Gala dinner, an awards night that recognises the best and brightest people in the civil construction industry in South Australia.

Well done Montana, and LR&M Constructions is looking forward to you winning many awards in the future! 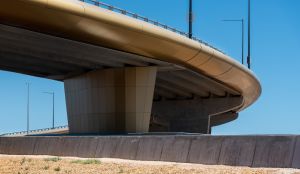 South Australians will now save time and avoid sitting in traffic when heading north, with the six-lane 110km/h Northern Connector opening to traffic today.

The $867 million non-stop motorway is the next piece in the 78-kilometre North-South Corridor puzzle that connects the South Road Superway and Northern Expressway.
Premier of South Australia Steven Marshall said the Northern Connector would help drive tourism in South Australia’s beautiful northern regions.

“To coincide with the Northern Connector opening, Tourism Barossa have launched a new tourism campaign to drive tourism and encourage more people into the region,” Mr Marshall said.

“The new campaign will capitalise on the increased connectivity to the region, with the Barossa now less than an hour from Adelaide which will help drive tourism and jobs.”

“For the first time there is now a free-flowing link along one of Adelaide’s most important transport corridors – boosting safety in the area and busting congestion,” Mr Tudge said.

“It has created 480 jobs each year since it started in 2015, which is a great result for the community.”

Senator for South Australia Simon Birmingham said the opening of the Northern Connector would encourage South Australians and visitors to rediscover the excitement of a weekend away and boost tourism to the regions.

“The Northern Connector will link metropolitan Adelaide with our northern regions, making it easier for all South Australians to enjoy a daytrip, getaway or weekend away,” Mr Birmingham said.

LR&M Constructions has completed the construction of the Waterloo Corner Interhange Bridge and has opened the road to traffic.

The interchage is part of the $885m Northern Connector project that LR&M Constructions have been working on, with Lendlease and DPTI, since 2016.

The new bridge diverts traffic to St Kilda Rd, allowing construction of the new expressway to be completed. 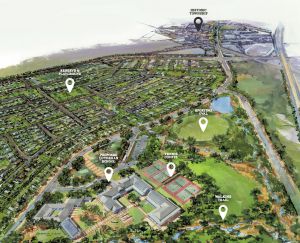 LR&M Constructions has been awarded the contract to construct Stage 1 and headworks of the Liberty urban development project in Two Wells by the Hickinbotham Group.

This exciting new precinct is in an idyllic rural setting, only a short stroll from the historic township of Two Wells. There are over 6 hectares of natural parks and reserves surrounding Liberty and the estate’s streetscape has been designed to fit organically within this natural landscape.

Construction is due for completion this Financial Year.

LR&M Constructions are part of the McConnell Dowell team that is undertaking the work, with LR&M Constructions upgrading 7 existing bridges between Lobethal and Tungkillo and also several kilometres of road widening.

“The Lobethal Freight Access Upgrade is an investment in South Australian business and jobs as it will provide more reliable freight connections to existing export/import gateways like Port Adelaide and to the state and national highway network,” said Federal Minister for Urban Infrastructure and Cities Paul Fletcher in a statement.

Exciting news for the new Glenside development being undertaken by Cedar Woods, with the brand new signalised intersection, constructed by LR&M Constructions, at Fullarton Road and Mulberry Drive swinging into action.

The new intersection features a full range of movements into the new development and will allow a free flow of traffic on Fullarton Road during less busy times.

Works have finished just in time for the new display centre opening and the release of Stage 1 to the market. 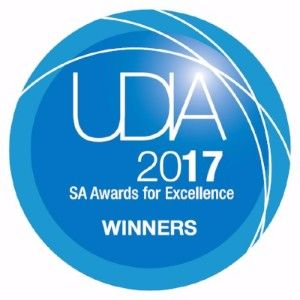 Two of LR&M Constructions projects have won awards at the 2017 UDIA SA awards night, including Springlake in Mt Barker, which won the President's award.

Both projects have seen infrastructure constructed by LR&M Constructions over multiple stages, including the iconic dual lakes at the Springlake.

UDIA (SA) CEO Pat Gerace said the major award winners have been recommended for judging at the National UDIA Awards for Excellence to be announced at the UDIA National Congress in Melbourne in March next year.

“These awards provide a great opportunity to acknowledge the high-performing companies behind the state’s most outstanding development projects,” said Mr Gerace.

“The standard of entries received for the UDIA awards has always been extremely high and this year was no different with projects that showcase best practice in urban development in SA. Last year South Australia brought two national awards home and I don’t see why that wouldn’t happen again.”

LR&M Constructions have begun construction on the third stage of the WEST residential development project, adjacent to Football Park, the home of the Adelaide Crows.

In addition to the road and services infrastructure, LR&M Constructions has also started construction of a new concrete water feature that will form the centre of the open space central park.

Stages 1, 2 and 2A have already been successfully completed by LR&M Constructions for Commercial and General.

LR&M Constructions has been awarded the next stage of construction works at the award-winning Mawson Green, a residential development by national property developer, Devine Limited.

This will be the fifth contract LR&M Constructions has undertaken at Mawson Green, having delivered the five million dollar first stage in 2012 and 2013.

Works will begin in September 2017.

Find out more about Mawson Green at www.mawsongreen.com.au 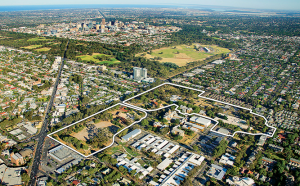 LR&M Constructions has been selected to deliver the first road infrastructure works at Cedar Woods' Glenside development on Fullarton Road.

The project consists of the installation of new traffic signals, as well as lane widening, drainage upgrades and a new car park for the brand-new sales and information centre. Works are due to begin in the last half of 2017.

Find out more about the Glenside project at www.cedarwoods.com.au/project-finder/glenside

Construction work has started on the Northern Connector project, with a sod turning cermony today at the Southern Interchange. 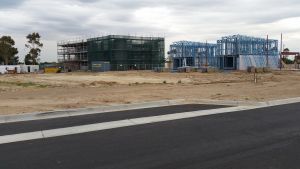 LR&M Constructions has been selected by Commercial & General to deliver the next stage of the WEST residential development at the former Football Park precinct at Westlakes in Adelaide.

Stage 2 of the development comes hot on the tail of the on time and on budget first stage, which is rapidly transforming into one of the most exciting residential developments in town.

Some of the seating in the stadium is currently being removed for reuse at suburban grounds, so you may well be sitting on football history at your local ground soon!

You can find out more about the WEST project at www.livewest.com.au 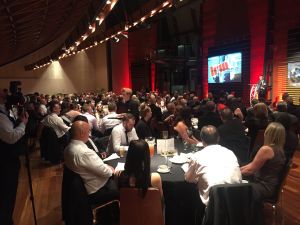 Family, friends, employees present and past and customers of LR&M Constructions gathered at the National Wine Centre on Wednesday 16 November 2016 to celebrate the 50th anniversary of the incorporation of the business.

This event concludes the external 50th year celebrations, which included a golf day at Tanunda Pines, sponsorship of a Urban Development Institute of Australia (UDIA) lunch in July and the launch of the history book in September.

3 of LR&M Constructions' customers have won awards at the 2016 Urban Development Institute of Australia (SA) Awards for Excellence, announced at the magnificent Adelaide Oval on Friday, 4 November 2016.

LR&M Constructions has successfully completed civil construction works at the first stage of the urban renewal project at the Westlakes football complex known as WEST for property developer Commercial & General.

The stage was finished on time and on budget, which has been a terrific achievement by the LR&M Constructions project team, considering that a large portion of the work was constructed during one of Adelaide’s wettest winters on record.

You can find more  about WEST at www.livewest.com.au

Family, friends, current and ex-employees of the Chamberlain family's construction business, LR&M Constructions, gathered at Pindarie Winery on the 26th of October to launch "The LRM Story: 1966 - 2016 Celebrating 50 Years".

Emceed by John Dawkins MLC, the invited guests heard from the author of the book, Bob Osborne, about how he went about collecting the material from the 50 year history of LR&M Constructions, as well as the technical detail of getting the book into a publishable state. They then heard from Chairman and Founding Director John Chamberlain recall his time working with his parents Lionel and Miriam in their various businesses, before they joined forces to create LR&M Constructions Pty Ltd and also a few memories he had working in the business over the years.

Copies of the book were signed by Bob on the night, which will surely become a collector’s item. 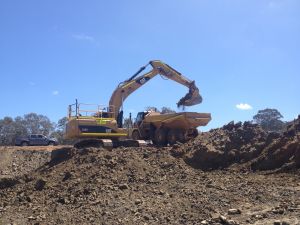 LR&M Constructions has been selected by Martin Road Developments to construct the civil infrastructure for Stage 3 of the Springlake residential development in Mt Barker.

LR&M CEO Michael Jeffery said “we are incredibly proud to have been chosen by Martin Road Developments to deliver Stage 3 of the Springlake Mt Barker development. LR&M is confident it can build on the outstanding work done by its expert team on Stage 1, Stage 1B and Stage 2 at Springlake to ensure that this development continues to be at the leading edge of new property in South Australia.”

You can learn more about Springlake Mt Barker at www.springlake.com.au 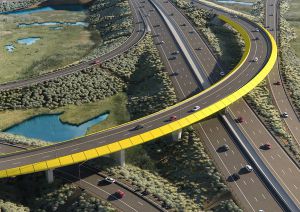 LR&M Constructions is part of the Lendlease team that was selected by the Department of Planning, Transport & Infrastructure (DPTI) to deliver the Northern Connector project that will link The Northern Expressway to the South Road Superway.